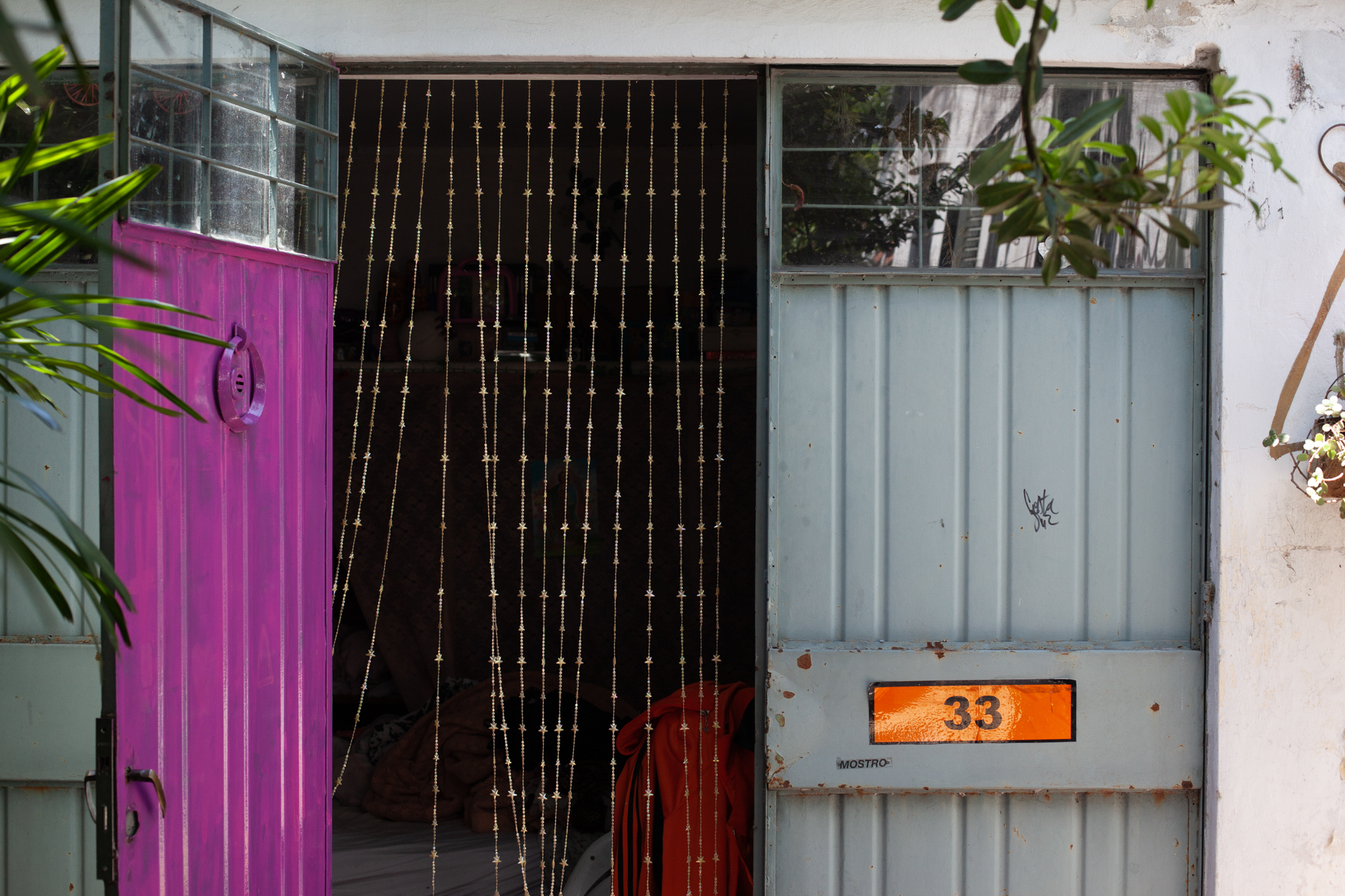 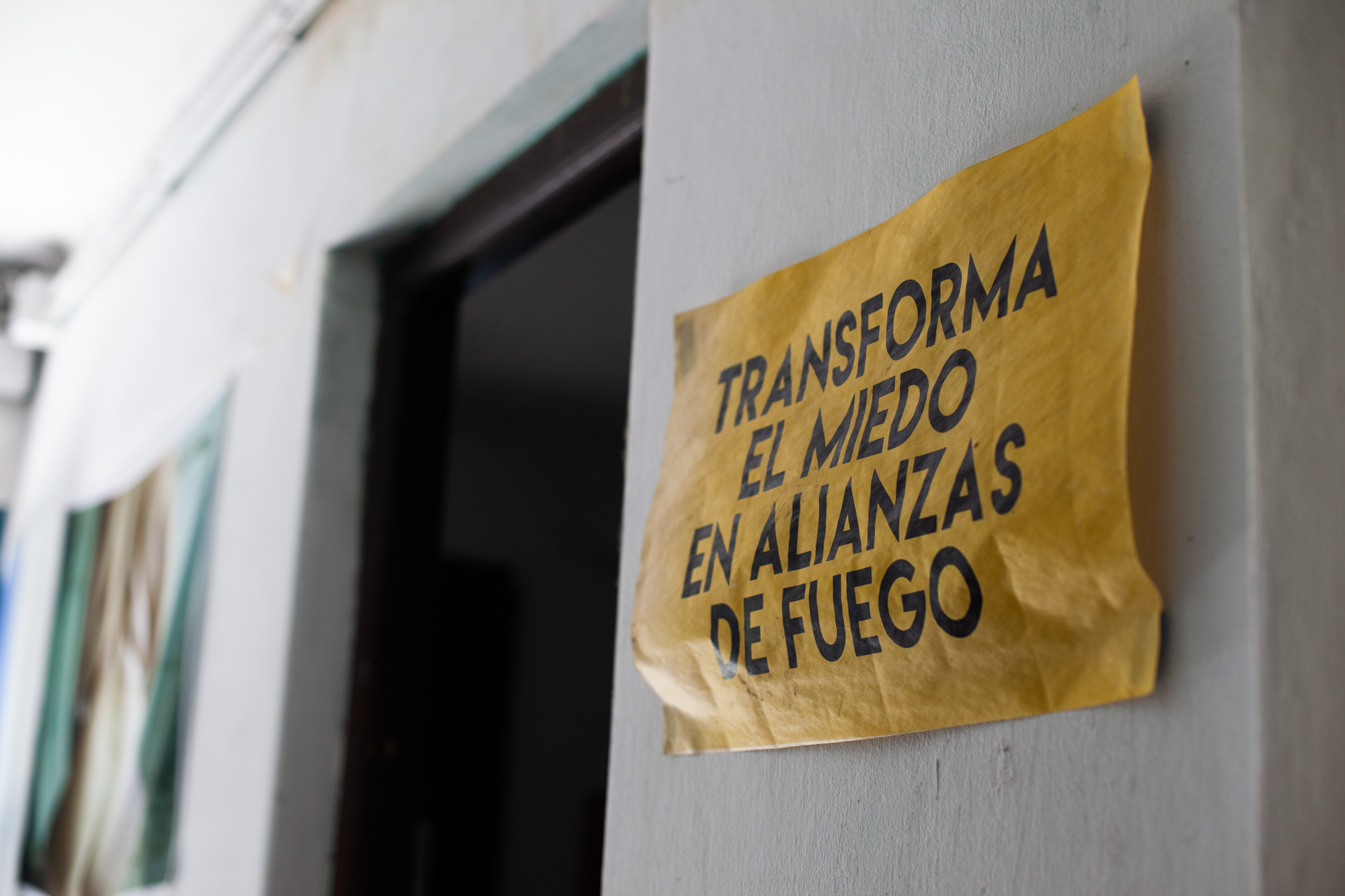 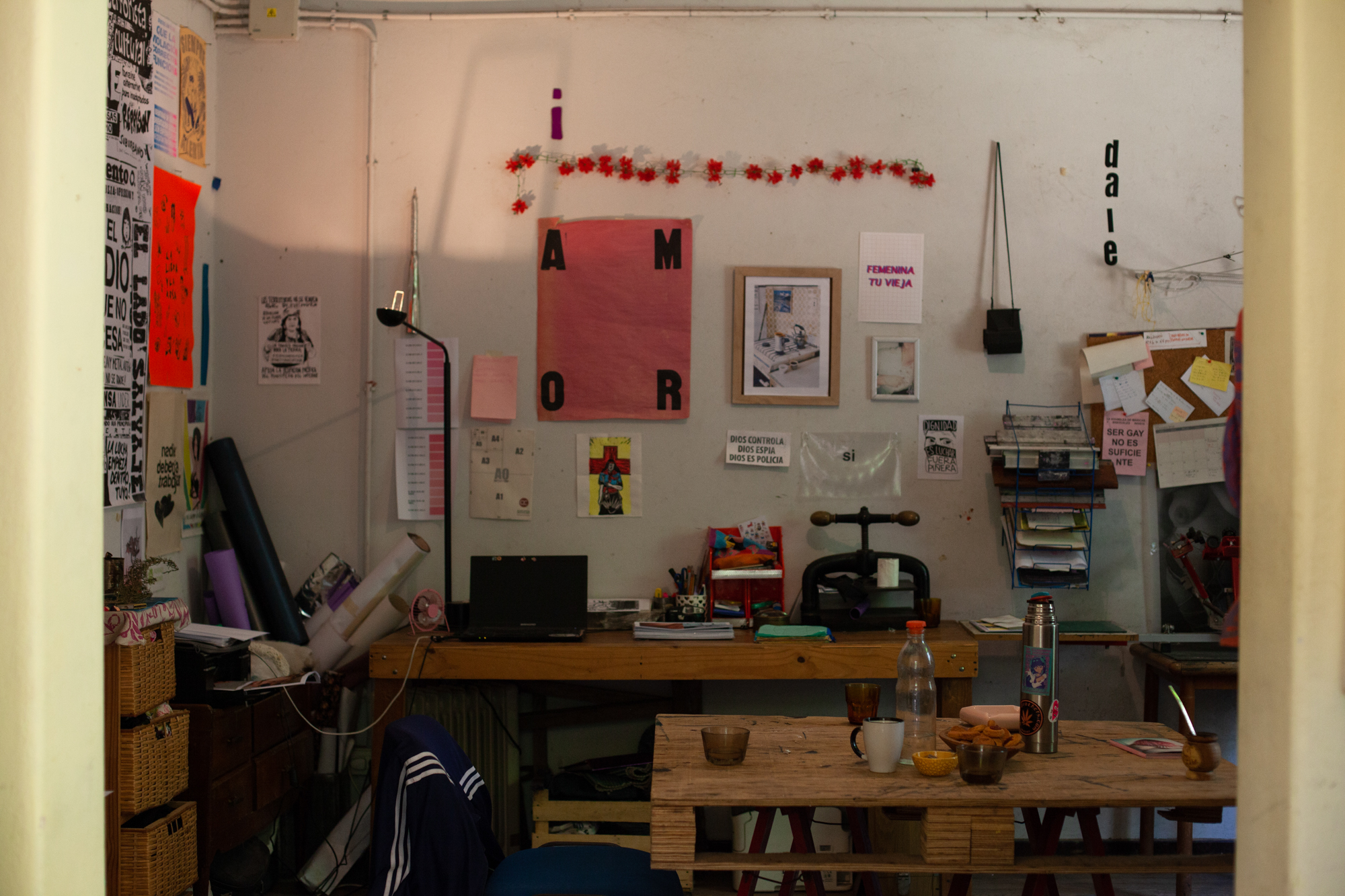 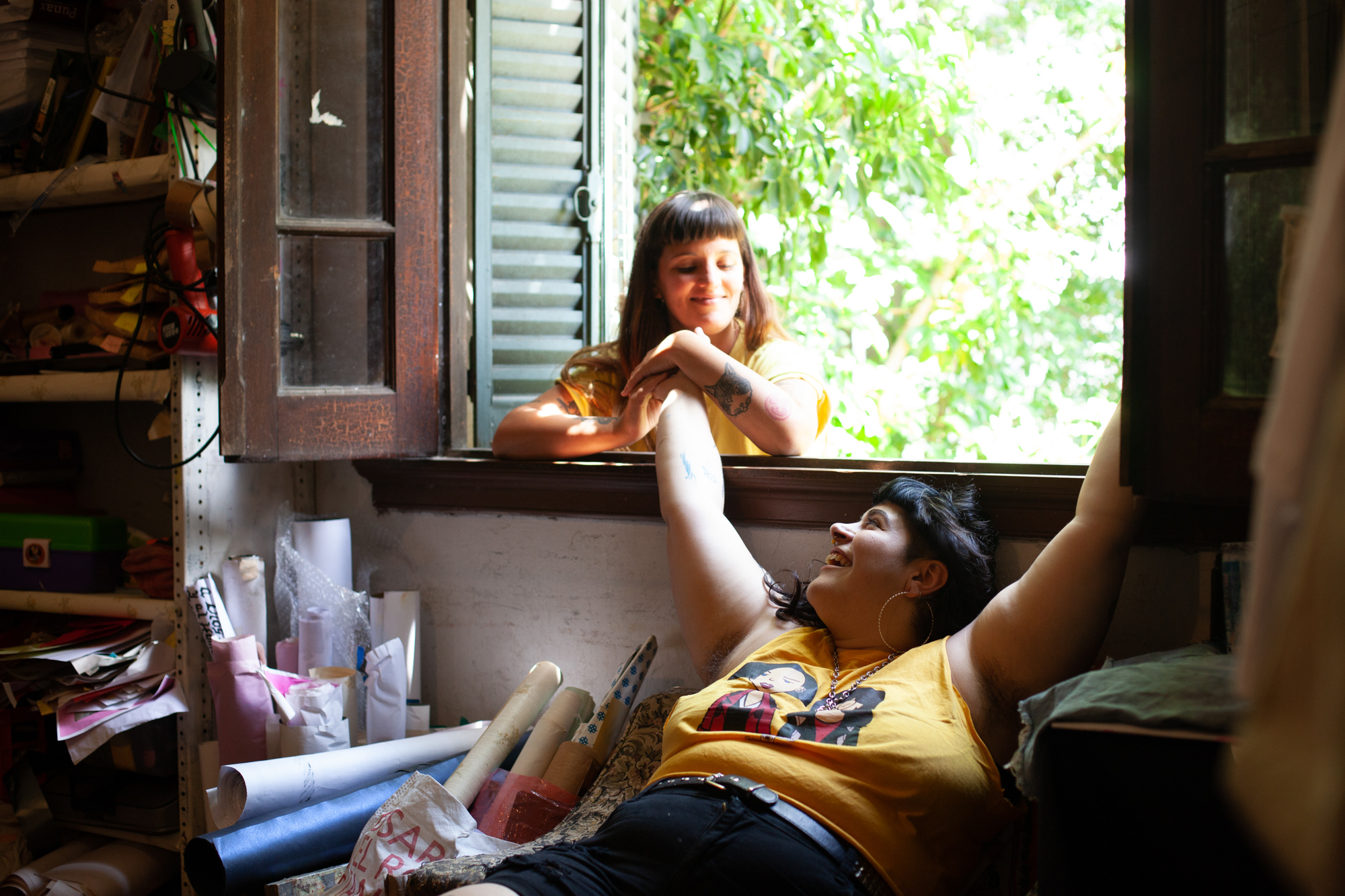 I visited Yoli and Rocío one spring morning in Ituzaingó, in Buenos Aires, in a house with worn surfaces a few meters from the train track. The space is full of details: posters, tapes, tools and slogans, that show that there lives a group of five young girls eager to do and share. While in the back kitchen four of them chatted around a table with the windows and the door that open to the garden, in the workshop that overlooks the street, Yoli and Rocío talked to me about their Profundo project, an independent publishing house that, from the periphery, it resists the relentless discourse that power imposes on us.

-What makes you jump out of bed in the morning?

-I’m a super frantic person, and, although I’m very hateful, I’m also enthusiastic. I love getting up, I go to sleep at night and I already want to be awake again. In a sense, I have the life that I always wanted, so I wake up feeling awesome. I can’t stand being in bed.

-I fluctuate, when I am down emotionally I find it really hard to get out of bed. This week it took a ton of effort to get up. When i’m in a frenzy, I fall asleep thinking “tomorrow I could do this or that”, but most of the time it’s the urge to do things here, in the workshop, be it a zine or a t-shirt, that helps me the most. When Yoli started working on Profundo, it was really great because I was very depressed and she got me out of bed with some mates. Many months went by, a whole winter with Yoli saying to me: “Ro, come, let’s get to work.'' This project is one of the reasons why I get up in the morning.

During the last stages of the neoliberal administration, where everything took a lot of effort, we prioritized earning cash and we couldn’t focus a lot on the creative side. There came a time where we said to each other “let’s sit down and cut out magazines, create again”.

-The collective aspect is also an incentive, right?

-Yes, the workshop is always frequented by friends from the neighborhood, it’s a space where we socialize our tools and spend time together.

Someone says to us: “Hey, I need to clear head and do something else, OK?” And we give them a seat at our table. In fact, our own rhythm slowed down because of looking at what was going on around us, and putting our energy into the collective, because the network, even though it is beautiful, it also takes a lot of effort.

-Lay me down some brushstrokes on your childhoods, how did you channel your creativity?

-Over time I became more withdrawn, but when I was younger I was very extroverted. I lived in a house here in the neighborhood, in Ituzaingó, I would ring everyone’s doorbell and  introduce myself: “Hi, I’m Belén” (that’s my real name), and asked: “¿Are there any girls here to play with?”. I also would talk for hours with the employee at the corner store or would play dress up. I would decorate the house, paint and I also would write a bunch: neighborhood chronicles, short stories, poems. I think I started to write because I spent a lot of time thinking and didn’t have anyone to talk with.

-I was raised in Lomas del Mirador, La Matanza. I was a fat child and was bullied a lot because of the body that I had, but at the same time, I didn’t really care, really about anything for that matter. Sometimes people liked me, sometimes they didn’t, I did everything I could. I had a “fat childhood” but it was very social. I watched lots of Art Attack and Sprayette. I would wake up on Saturday mornings and spend hours in front of the TV. It was fascinating to see people doing things. I would  bows and DIY projects, anything with my hands, tons of little gifts, I would make like twenty-five gifts for Easter or Christmas. I had a mini sewing machine. After school I sewed so much that the machine only lasted a month. I have always liked paper, whatever’s pink and glittery. I collected letter paper, little stamps, colored ribbons, erasers, all of which is now part of my huge zine collection. When I was twelve, my sister gave me an analog camera. My parents bought me a roll and I used it up in an hour. I could take like thirty-six pictures of my dog. Then, digital cameras came out and my dad bought a pocket one. At first he didn’t lend it to me because he thought it was expensive. So I stole it. But later he ended up lending me it and when I was eighteen I inherited his reflex camera.

-So we can say that Rocío, focusing on the material expression, and Yoli, on writing, were two young girls with lots of initiative, is that true?

-Recreate for me your lives before converging around Profundo.

-Ten years ago I did a bunch of analog photography, a lot of documentary too. I portrayed my daily life, punk and anarchist settings, concerts. Before I started taking pictures, when I was fifteen, I began hanging out in concerts where zines were distributed. I collected them, produced and exchanged them by mail with kids from Córdoba up until one day when my mom threw all of them in the trash. That was a breaking point for me. For a while, I didn’t make any zines and later I started taking pictures and experimenting with formats, with ways to show the material I had: in exhibitions, activities and street interventions.

In 2014, I was attending a workshop on documentary photography where the final assignment was to make a photo book. That made the two things come together: my previous life of concerts and zines with the pictures that I was creating.

I met Iby, a Chilean girl with whom we had the idea of starting to publish our photos in photo books and zines on our own. We hosted a party, raised money, bought a printer. Then Rebe joined in, another Chilean girl, and in 2014 the publishing venture took off. The first thing we published was an anthology of feminist contemporary poetry from the Southern Cone with many people who had different points of view about the situation, “a talking networking”. At that time, we sold our zines and books in womens’ meetings, in the neighborhoods, in the streets, at the Pride parade, in occupation protests, at indie and punk concerts, bars. We covered many different places.

-I was a very intense person. I took courses on everything, I did bookbinding, I sewed, and all of a sudden I left to Bariloche where there wasn’t anything at all. At seventeen I got pregnant, took charge of the situation, and went to live in the middle of the woods with my son Simon and his dad until one day in 2010, after three or four years, I couldn’t take it anymore. A lady of about eighty that was staying in a motel near me was going to Buenos Aires, and I asked her to take me there too. I came back to Ituzaingó, signed up for music therapy, and enrolled Simon in kindergarten. I separated and rediscovered  the teenager that I still was at that time. Always writing, writing, writing, because I write since I’ve had use of reason.

When we met with Roci in 2016, I was working ten hours a day at the office, dressing up in a way that I didn’t like, having to do my hair and living a parallel life from seven p.m until I went to sleep. She already had the independent press, and I really wanted to publish a zine that was called Menos mal, but had no idea how to materialize it.

With Ro it was kind of love at first sight. We became close friends during the first birthday party I invited her to, almost without knowing her at all. Menos mal was born in her room, in her bed, pouring a beautiful catharsis over the computer. I came close to her timidly and, at the same time, wanted to sell and promote books and zines with her. I quit the office in the midst of panic attacks, and with the indemnification money I bought a printer. Then, in 2017, we fully took off.

-And finally, what is Profundo?

-Profundo is an indie publisher that came into existence because of our desire to self-publish. It’s independent. It doesn’t receive any subsidies. After a process that took several years, we defined the content we publish: poetry, photography and illustration. The themes are gender, sexuality, body, feminisms, and most of the authors talk in the first person. Since we really support the “do-it-yourself” mentality, we design, print and bind, besides deciding the contents. We move from the periphery, we are intense and passionate, we pour everything that happens to us into Profundo. We edit pretty visceral things, we generate bonds with the people, we edit and insist that our friends and people around us can do what they want. Create in order to live could be our motto.

We work in collaboration with Viciosa editora, which is our framework, and that publishes texts about queer theory, feminism, anarchism. We also work with Ramas de fuego, another suburban project created in Pontevedra, from which we inherited all the serigraphy tools. We go on the road and talk with people from other territories: Chile, Córdoba, Mendoza, Mexico. In Profundo, there is a collective spirit. For example, we print labels for a bread-making co-op run almost entirely by trans people, and they give us bread for breakfast in exchange. At the same time, we teach self-editing and self-publishing workshops, elementary zine-making, self-publishing photography and serigraphy, sharing our tools with the people from the neighborhood.

Menos mal - Gedencia y ternura, Yolibel Godoy 2016 /2017.  Con nosotras no te metas. Photography and illustration compilation for the womens' national meeting. Profundo editions, Are you a cop or what? and revista Iglú.

-At this time when the imperative from power encourages individualism and meritocracy, these gestures seem subversive, don’t you think?

-Yes, that also motivates us!